Kathryn Perry has written a short story about Harry, an infant monkey in Celeste's group, learning to cross the road. We are hoping that this will be the first in a series of children's books written in Spanish and English, to help us in our environmental education efforts in Costa Rica. You can hear the Spanish version of the story by clicking this link: 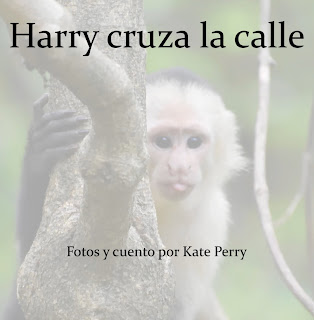 Posted by Capuchin Foundation at 08:55
Email ThisBlogThis!Share to TwitterShare to FacebookShare to Pinterest

In the past year we have added some new online methods for sharing information about the monkeys. With the help of UCLA undergraduates Dan Hirshleifer and Alexa Shackelford, we uploaded video clips of most of the behaviors in the monkeys' behavioral repertoire, which you can view on this link of our website:
http://capuchinfoundation.org/research/ethogram.html

The Capuchin Foundation Facebook page has become the place where we most regularly post news, photos and videos about the project and about the lives of the monkeys. We also maintain Facebook pages for three individual monkeys (Pitufo, Dali and Chaos), so that viewers can better imagine the trials and tribulations of life as a capuchin monkey. Please visit our Facebook page, and if you like what you see, "like" it and encourage your friends to visit it as well.


Posted by Capuchin Foundation at 15:11
Email ThisBlogThis!Share to TwitterShare to FacebookShare to Pinterest

Another year of hardship for the monkeys

This year marked the driest rainy season in the history of the monkey project. The photo below is the menu for the monkeys in July, 2014. No succulent fruits: they were eating the wind dispersed seeds of Luehea and the hard seeds of monkey's comb and achiote fruits - foods they normally don't even bother to sample. There were hardly any insects available either, though they found some grasshoppers and paper wasp larvae. There seems to be a general trend for the weather to be hotter and drier, and for greater irregularity in the timing of the fruiting of plants in the monkeys' diet. Notice how dry the undergrowth is in the middle of the rainy season this year! 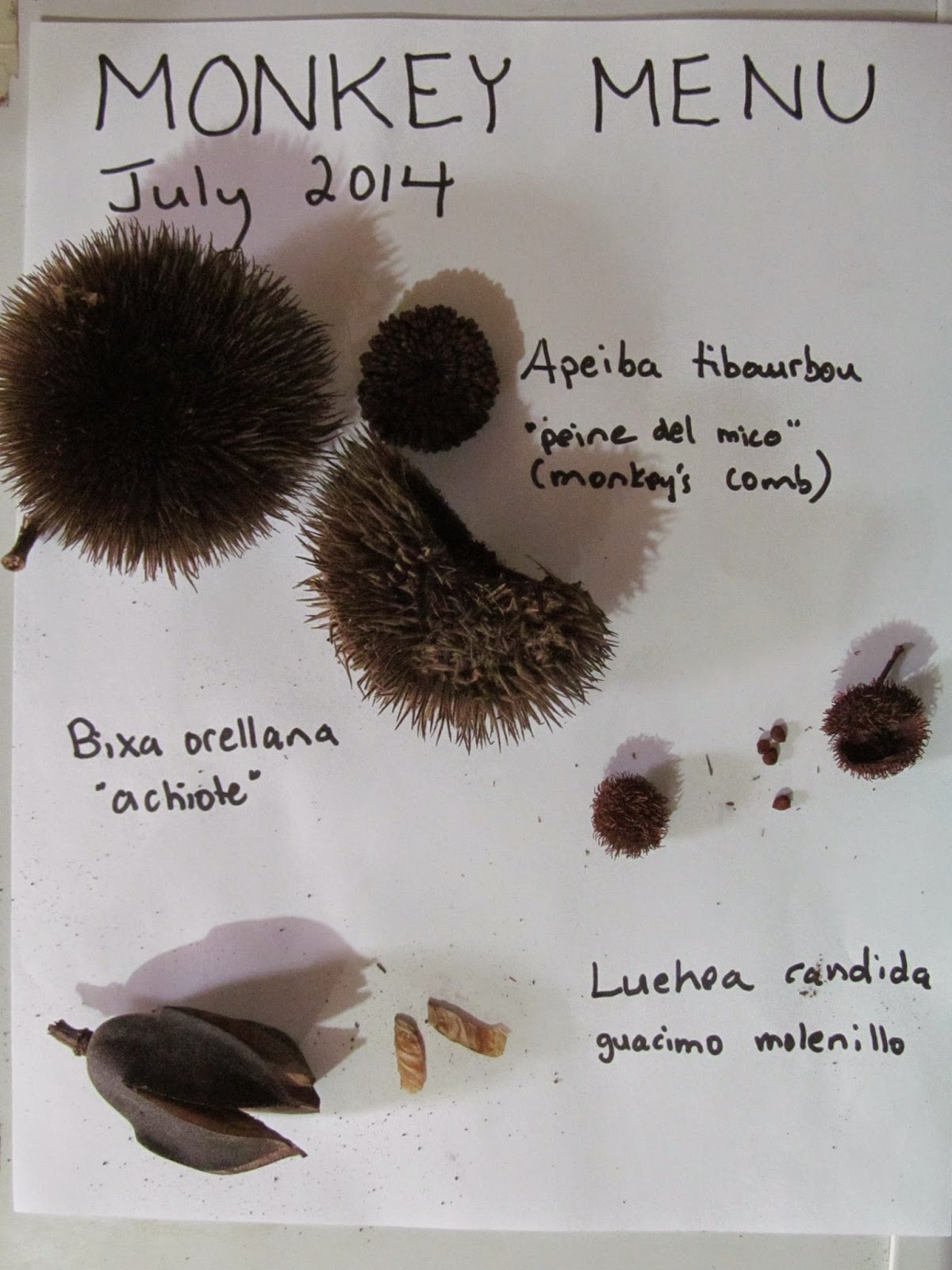 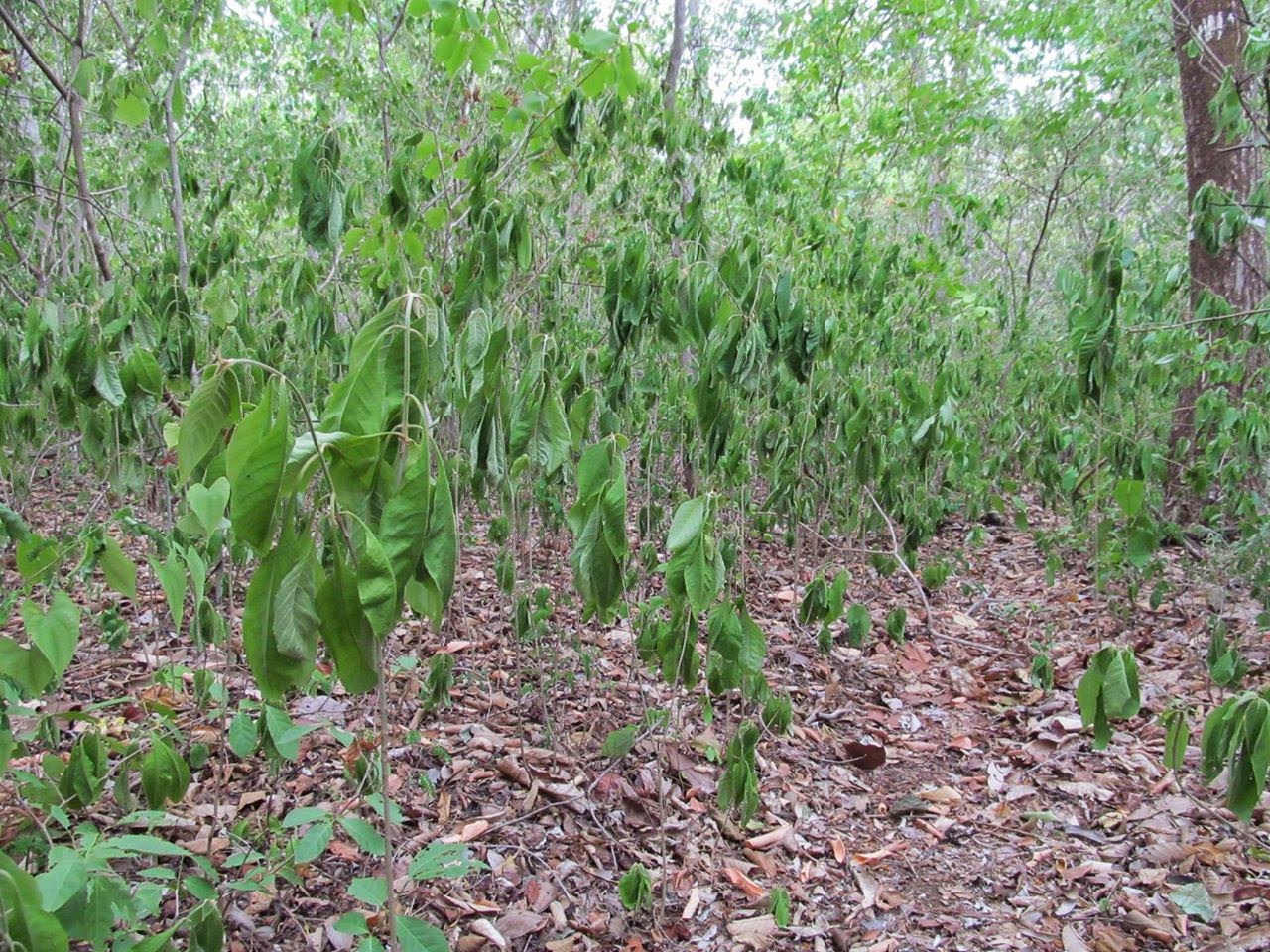 Posted by Capuchin Foundation at 14:59
Email ThisBlogThis!Share to TwitterShare to FacebookShare to Pinterest

We have a new educational tool for environmental education teachers! Matt Ziegler, a research assistant at the Lomas Barbudal Monkey Project, has developed a new website designed to show people what monkeys do all day, and what our research team documents about their behavior. He has created a website: http://www.winslowhomerday.net 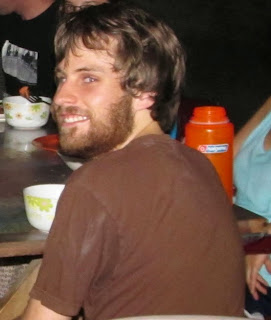 In order to help Matt develop this project, we followed a single infant, Winslow Homer (son of Dali, the alpha female of Abby’s group) for an entire day, using our usual protocol for data collection. We carry a Garmin GPS unit in our backpacks as we follow Winslow Homer, collecting behavioral data. Matt has superimposed this track on a Google Earth image so that you can see where the monkeys went and what the habitat looks like. This was done in the dry season, so you can see that the forest is green by the rivers, but losing its leaves elsewhere; the yellow trees are flowering Tabebuia trees. You can use your cursor to follow the route that Winslow’s family took that day. As you click on the icons, you will see a list of time-stamped notes, indicating what Winslow and the monkeys near him were doing at that time. We use a special short-hand coding system to collect these data, but those notes are expanded into English phrases here so that they will be more intelligible to the reader. If you go to the legend in the upper left hand corner you will see that you can select the kinds of notes you would like to see (e.g. grooming behavior, feeding, coalitions). Biographical notes about the monkeys in Winslow’s group are available from the “Monkey Biographies” menu at the top of the page. Winslow Homer turns out to be a particularly interesting monkey. A few months after the day portrayed in this website, Winslow broke the project’s record for youngest male ever to migrate from his birth group, doing so at age 14 months. This happened when he accidentally ended up in Rambo’s group after an intergroup battle between his own group (Abby’s) and Rambo’s group at a fig tree. This brave little monkey handled the move very well, making friends instantly and adopting Mombassa as his new mother.

Posted by Capuchin Foundation at 10:08
Email ThisBlogThis!Share to TwitterShare to FacebookShare to Pinterest

Forest fires are always a problem in tropical dry forest, but this year our study site was hit particularly hard at the end of the 2013 dry season, when a fire burned the Las Mesas sector of the field site, part of the Pelon forests, and the watershed portion of the reserve that was formerly the San Ramon de Bagaces Agro-ecological Reserve. Our preliminary assessment of the damage indicates that three groups had >70% of their range destroyed, 3 had <10% of their ranges destroyed, and 4 groups had 20-40% of their home ranges burned.